At Luxer One, we use only the highest quality materials available to maintain security and integrity in our products. That's why when it came time to select a platform to run our proprietary software, we chose Apple's iOS. As the most secure hardware on the market and a UI most customers are already familiar with, we believe this provides the most seamless experience for the customer.

Apple Insider has been the most trusted review and news site for everything Apple since 1997. In this article, writer Amber Neely explores Luxer One's unique use-case for the Apple iPad and iOS software.

Read the full article below, or see the original article on Apple Insider. 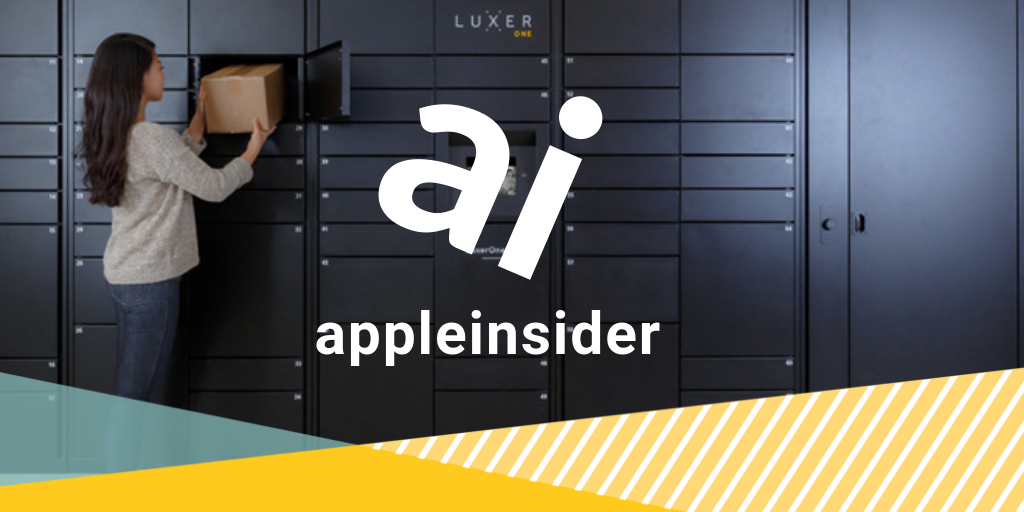 In this new series we're going to take a look at companies that have integrated Apple products into their companies in interesting or useful ways. First up —the Luxer One parcel lockers, which are a solution to the problem of secure package delivery in dense residential areas.

Apartment dwellers have a unique relationship with parcel delivery services like FedEx, and if you've ever lived in an apartment, you'll know the woes pretty well. For some apartment buildings, packages are delivered to a central, unsecured mail room, and the system may be largely honesty-based. If you're lucky, maybe your landlord has installed security cameras.

For others, your packages get delivered to an office. For a lot of people who work a standard nine-to-five, chances are, you're probably not going to be able to make it to the office before it closes. And for some, the unlucky few, you're likely to have no idea where your packages will end up.

My apartment building, for example, is roughly the size of an entire city block. It is a former factory that was flipped into a mixed-use building. In addition to around 150 apartments across nine buildings, there are also multiple businesses and even a high school inside of it.

There are advantages to living in a building like this, but package delivery was never one of them. Packages originally were delivered to a central office, but at some point when the building got renovated, all of the package delivery services were given the ability to deliver packages directly to your door.

Unsurprisingly, due to the fact that the building is laid out like a mythical Roman maze, this lead to a lot of packages being delivered to the wrong places and an uptick of package theft. Eventually, after enough complaints, the property management company put their foot down, and installed a Luxer One package locker system. 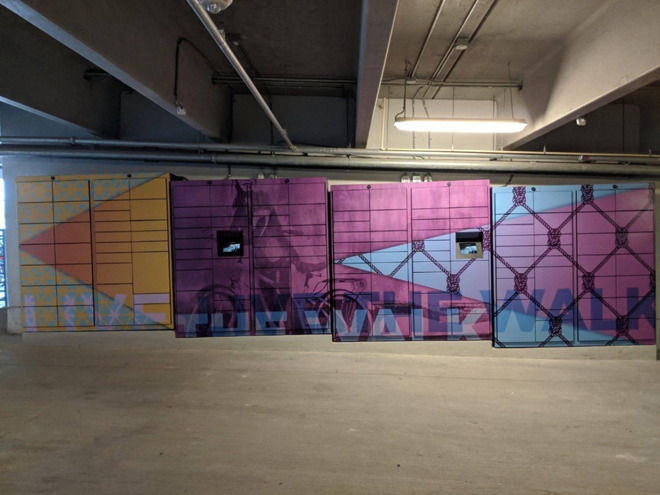 I'd gotten a little postcard for Luxer One stuck into the side of my door one day. It didn't explain much, aside from the fact that the way our packages got delivered would soon be changing. Considering every time I got a package delivered I usually had to hunt through two or three separate buildings, it seemed promising.

Soon after, a large black structure appeared in the mail room, taking up the entire side of the room. Its matte black surface seemed almost ominous. Its tiny screen, at that point, was unlit. Each door was perfectly rectangular and featured no latches, no keyholes, no nothing.

A day or two after that, the Luxer Lockers went live. A tiny cheerful screen played a little slideshow as it waited for someone to come retrieve their packages.

Since then, the Luxer One has become a well-loved addition to my building. Retrieving packages can be done 24 hours a day, perfect for those who can't make it to the office while they're open. No longer are packages lost in the void or stolen.

Using the Luxer One is also incredibly easy. You'll get an email that has both a six-digit code and a QR code. From there, you'll head to the Luxer One, show your QR code to the camera or enter the code and sign for your package. The door will swing open, you'll grab your package, and then be on your merry way.

The whole process, save for walking to and from the lockers, takes about 25 seconds. Most of that is just digging through your email for the code.

And the central hub a Luxer One unit is an iPad.

In 2005, Luxer One had actually started out as a different company —Laundry Locker. Laundry Locker was designed to be a solution for dry cleaning delivery to apartment complexes. According to the folks at Luxer One, the Laundry Lockers were an instant hit with residents.

A few years later, property managers took notice and asked if there was a way the company could take on the problem of package delivery. At this point, online shopping was becoming incredibly popular, and the influx of packages were causing serious problems for both property managers and residents. In 2013, Luxer One was born.

"Our mission at Luxer One has stayed constant after all these years: to relentlessly improve how the world receives goods," a spokesperson for the company told AppleInsider. "In our infancy, we realized we needed to design a software and hardware combination flexible enough to accommodate any delivery type - whether it's an oversized box or even a perishable delivery. And that the software needed to be configurable to different environments, from retail to apartments to workplaces."

Luxer One didn't always use iPads, though. The first iteration was a non-iOS enabled locker that worked, but the company noted that something didn't feel correct. The touch screens seemed off and didn't work well, so they'd decided that they'd seek another solution. Luxer One had seen that other companies had utilized iOS solutions into their products and decided to that would be their solution.

Opting for the iPad provides myriad benefits. The company notes that the screen simply looks better and the touch screen feels more responsive. I'm inclined to agree. The experience is quick and easy and the screen registers every touch, every time —unlike ATM-style screens. On top of that, the interface is just easier to use.

It's not without drawbacks, though. The first hurdle is figuring out how to put an iPad into a parcel locker in the first place. The same problem surfaced when they'd realized they would be putting an iPad in a parcel locker outside. 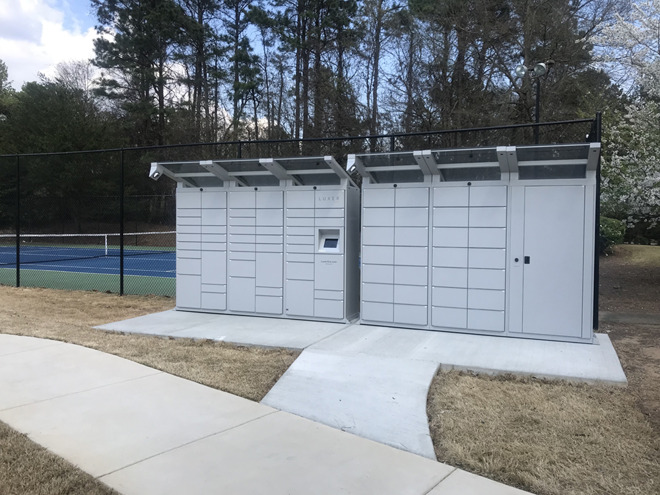 "About two years ago, we released our outdoor lockers. Putting an iPad in the great outdoors was no easy feat," said a spokesperson. "Our engineers developed a sophisticated thermal cooling system for temperature and airflow modulation, along with specialized seals to prevent weather damage from wind, rain, and snow."

"You're also tying yourself to Apple. Getting support from them can be challenging. Integrations with peripherals can be tricky. And you can't easily swap out an iPad out with something else on the market. That being said, customers will notice the difference in experience and reward you for it." 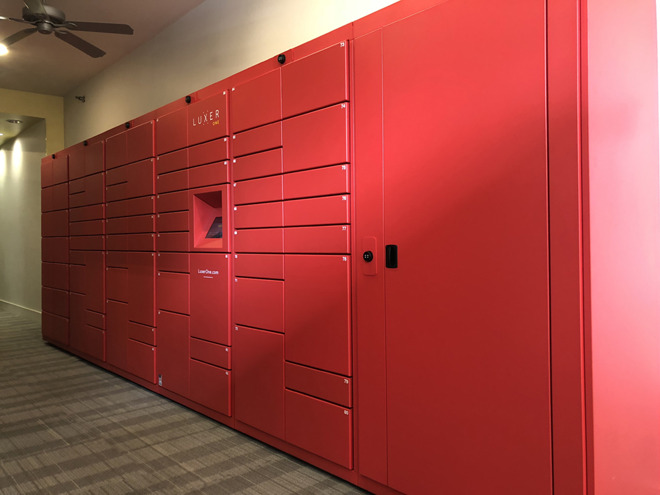 The company has been lauded for giving residents the peace of mind, knowing that their packages are securely stored until they can retrieve them. Property managers no longer need to worry about their offices disappearing under an avalanche of packages during peak online shopping times, either.

Looking toward the future, Luxer One plans on expanding their service to even more environments. This includes office mail rooms, retail stores, and university campuses. At a big box store, a shopper would be able to simply walk in, type in their code, and retrieve their product without the need for tracking down an employee or waiting in line.

Overall, Luxer One has come up with a great way to solve a problem that plagues many apartment buildings, and has some impressive goals for solving problems for other locations as well. We're interested in following what the company does in the next several years.

Written by Luxer One

Welcome to your one-stop destination for the latest in package acceptance and delivery innovations! Subscribe to this blog to learn how multifamily communities can stand out with smart technology and unique amenities that keep residents happy.